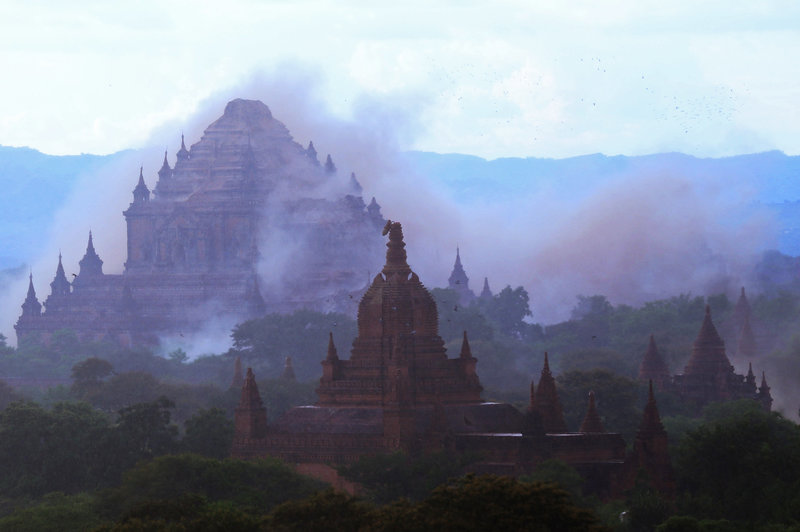 The Sulamuni temple (Bagan, Myanmar) surrounded by clouds of dust as the force of the Earthquake moves the ground beneath. (Hersher, R., 2016)

The recently publicized 6.8 magnitude Earthquake, on August 24th, in Myanmar (Burma) reminds us, once again, of the shear power that is released in tectonically active regions when Earth’s plates interact. The epicenter of this seismic activity, was located 25 km (15.5 miles) west of the city of Chauk and approximately 80 km (50 miles) beneath the surface of Myanmar. Separated by ~7,800 km (~5,000 miles) and only a few hours, Norcia, Italy was also shaken by two separate earthquakes of magnitudes 6.2 and 5.5 occurring at 2:33 and 1:36 UTC, respectively. With such an active day, geologist around the world were paying attention.

While this isn’t the first Earthquake, or strongest, of the year, with 53 ‘significant earthquakes’ recorded by the USGS since January, it does provide yet another opportunity to understand more about these geological phenomena. (USGS, 2016) So how does an earthquake work, and what is the cause of the aftershock that so many reporters refer to when talking about an earthquake? An earthquake is defined as the shaking caused by the rupture and subsequent displacement of rock beneath the Earth’s surface. (Earle, S., 2015) The rupturing, referred to as strain in the geosciences, occurs when enough stress is applied to a rock that it becomes permanently deformed or strained. (remember: stress causes strain) The resulting area of permanent deformation and total displacement of rock, (as well as depth beneath the surface) is directly linked to the magnitude of the earthquake experienced.

As we know, Earthquakes do not just start and then simply stop once the displacement of rock has finished. The released energy produces waves within the interior of the earth that bounce around and move in all directions from the hypocenter. Unlike the epicenter, which is the location on Earth’s surface directly above the area of displacement, the hypocenter is the area beneath the Earth’s surface where the shock occurred. There are two types of subsurface waves called body waves. The first body wave is called the P-wave or primary wave, while the second is called the S-wave, secondary, or shear wave. Primary waves move much like that of a coil spring compressing and decompressing, while Secondary waves move in more of a sinusoidal fashion. When the energy of body waves reaches the surface, Rayleigh and Love waves are formed. Rayleigh waves have an up and down motion while Love waves tend to move horizontally from side to side. These surface waves are what cause the majority of damage when an earthquake occurs.

Geologically, Myanmar and Italy are very tectonically active countries and have plate boundaries that almost perfectly bisect them; the minor Adriatic and Burma plates. Click here to see and updated map that includes major earthquakes magnitude 4.5+ worldwide for the past 7 days. (USGS, 2016) What about the aftershock? Aftershock is best described as a cascading event. Once the first earthquake occurs and the underlying rock has effectively been relieved of it’s stress, it begins to stress nearby rock until it too fails and is displaced by the resultant force. Generally speaking, the larger the initial earthquake, the larger and more numerous the aftershocks. Usually the aftershock occurs within minutes or hours after the main shock, but in some cases they will continue days, weeks, and even years after the initial event. Often times people will ask if geologists can predict when the next BIG earthquake will occur. The answer is quite simply, no, we cannot. Even with today’s advances in technology, there are a lot of variables that go into determining the point at which a rock will break causing the displacement needed to create massive, and deadly, earthquakes. Because Earth’s plates are constantly moving (albeit slowly), earthquakes and tremors happen relatively frequently, and it is not until we are hit by a BIG one that another reminder is sent, showing us just how powerful these Earth processes are.